Baseline studies on child marriage in Mali, Niger and Togo

This series of reports explores the drivers and consequences of child marriage in Mali, Niger and Togo.
Descargar recurso 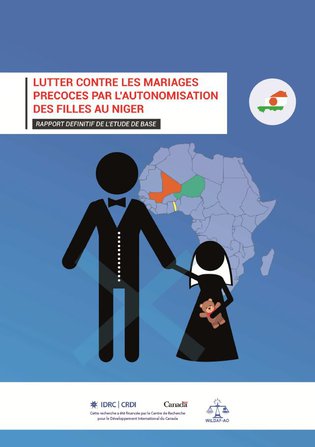 This series of report by WILDAF seek to better understand child marriage in Niger, Mali and Togo to inform strategies to address the practice. They carried out desk research and interviewed over 5,000 people.

In Niger and Mali, they found that men usually make the decision to marry girls early while in Togo, both parents are involved. In Niger and Mali, the most common reasons for child marriage include trying to prevent pregnancy outside of marriage, which is also linked to preserving perceived family honour in Niger. In Mali, child marriage is also believed to maximise fertility and better educate girls. In Togo, they found more economic reasons behind child marriage. Communities see child marriage as a way to access resources, reduce expenses or repay debt. It is also linked to traditional and religious beliefs.

In all three countries, most women who married as children were not educated.